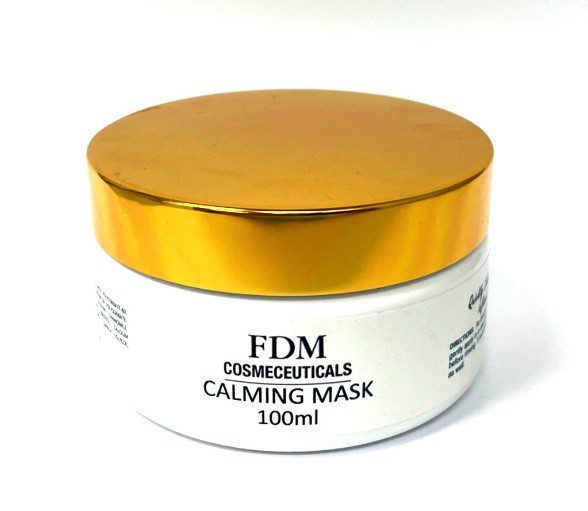 THE CALMING MASK We have worked diligently to create a sensitive skin treatment mask offering calming, soothing and healing for these difficult skin conditions. Our Treatment Mask contains some truly wonderful ingredients handpicked for their renowned and longstanding positive results for all manner of skin sensitivities. Azulene this blue oil extracted from the German Chamomile and Tansy flowers has been a widely researched and a favoured essential oil or ingredient by aromatherapists for many sensitive skin conditions.

GERMAN CHAMOMILE
Also known as chamomile Recutita or Matricaria chamomile. The plant is native to Central and northern Europe.
It is now cultivated all over Europe. The essential oil is steam-distilled from the flowering tops and is dark blue in colour. Its aroma is of a herbaceous nature with a softer honey-like undertone.As a SKIN OIL
The oil has primarily been known throughout the past 300 years as a skin oil. History has given us a trail of accounts where Azulene has enabled healers and doctors to heal and soothe many skin conditions, from the deeply irritated to the extremely sensitive skin problems. It has been combined with other essential oils and plant extracts to form soothing balms and elixirs. Many accounts show where cases of eczema, dermatitis, itchy and red skin problems are soothed, calmed with reduced inflammation.

These anecdotal accounts of the past have led to research in the 20th century researching and quantifying the anti-inflammatory effects of Azulene with great success. It is also a vaso-constrictor and can help reduce the appearance of enlarged capillaries of the cheeks (rosacea).
Chamomile when used as the whole flower is known to provide benefits for:
1• Wound healing
2• Inflammation
3• Redness
4• Eczema
5• Hyperpigmentation
6• Acne
7• Free radical damage
8.Wound healing

Essential oils extracted from chamomile reportedly have antimicrobial properties to protect against certain types of bacteria, fungi,
and viruses.

A 2018 study in Germany by a Dr Engelman found that ointment with Roman chamomile extract significantly improved the healing
and antibacterial activity in an infected wound compared with tetracycline ointment and placebo.
In fact, the German Commission E, a group of scientists, doctors, pharmacologists, and toxicologists who determine if drugs are safe for use in Germany, approved the use of chamomile for bacterial skin problems.

Chamomile is often used to help tame skin inflammation from sunburn and rashes. The German Commission also approved chamomile for treating skin inflammation.
“Chamomile contains the anti-oxidant apigenin, which aids in lowering inflammation by inhibiting the release of inflammation-causing chemicals,”  The ancient Greeks were on to something when they applied crushed chamomile to red, irritated skin. That’s because chamomile
seems to curb inflammation, an underlying cause for skin redness.
“Chamomile deeply but gently penetrates the skin to alleviate inflammation,” Engelman explains.

Soothing sensitive skin
Chamomile’s anti-inflammatory and healing properties appear to be especially soothing for sensitive skin types.
“Bisoprolol, chamazulene, and apigenin are three compounds found in chamomile that give it soothing and healing benefits that
are [great] for sensitive skin,” says Engelman.
Research suggests that skin creams containing chamomile may even be beneficial for those with skin conditions, like eczema.
A 2012 study found that applying German Chamomile oil to the skin effectively lowered allergy markers.

Hyperpigmentation and skin lightening
Hyperpigmentation is when areas of skin are darker than surrounding skin due to overproduction of the hormone melanin. It’s
usually caused by injury or inflammation to the skin, and it’s commonly linked to sun damage, acne, or hormonal changes during
pregnancy.Skin-lightening products with chamomile that treat hyperpigmentation may help.

“Chamomile has astringent and brightening properties that, in addition to tightening pores and softening the skin, can fade acne
scars and hyperpigmentation when used regularly,” Engelman says.  Hyperpigmentation is when areas of skin are darker than
surrounding skin due to overproduction of the hormone melanin.

CALENDULA
Calendula oil is a natural oil extracted from the family of marigold flowers (Calendula officinalis). It’s often used as a complementary
or alternative treatment. Calendula oil has antifungal, anti-inflammatory, and antibacterial properties that might make it useful in healing wounds, soothing eczema, and relieving diaper rash. It’s also used as an antiseptic.

One laboratory study found that calendula extract may be useful in treating and preventing acne vulgaris, but more research, especially studies on humans, is needed to support these findings.
Calendula oil might improve the overall appearance of your skin. One study found that a cream containing calendula extract may promote skin hydration and firmness, but more research is needed.
Overall Calendula is a known soothing ingredient and has been used to treat sensitive skin conditions due to its known anti-inflammatory effect for the past 200 years or so.

ALLANTOIN
Allantoin, is an extract from the comfrey plant, which is native to temperate climates of Asia and Europe. It has potent healing and soothing
properties, and for centuries comfrey leaves were used to help heal minor skin injuries and swelling.

1. Moisturizes: Allantoin acts as an emollient that keeps your skin moisturized and prevents dryness and irritation.1
2. Soothes skin: Allantoin has the additional functionality of being a calming agent. It soothes and protects the skin.
3. Improves skin healing.
4. Exfoliates: Allantoin is also keratolytic, which means it exfoliates dead skin cells.
5. Hydrates: can increase the moisture contents of cells, therefore, fighting against the damage of transepidermal water loss (TEWL), which keeps the skin looking plump and youthful.
6. Improves skin dullness: Allantoin promotes cell proliferation and supports overall “remodelling,” as Dr Ava Shamban (a Beverly Hills dermatologist) puts it. “If the skin is stressed by the usual and customary list of offenders, then the skin is going to try to repair itself as opposed to having more cells turn over,” she explains. “What we want to do with the epidermis is to have it constantly exfoliating itself and having more cells be produced because that’s how you get a faster transit time of the epidermal cells. As people get older, then that transit time from the base layer of the epidermis to the top layer takes longer and the skin is stressed, and those are some of the causes of dull, dry skin, too. This is going to help with that cell proliferation.”
• Rejuvenates the skin cells: Although it’s gentle, it is still an effective anti-aging ingredient as well as its healing and soothing properties.

VITAMINS A, B, C AND E.
These Skin Vitamin work in synergy together to protect, heal, hydrate, and fight off free radicals as well as fight the effects of free radicals. The synergy of all vitamins working together in the skin provides for a far greater effect than just one or two workings separately. They have been prepared to not irritate even the most sensitive skin.

LINOLEIC ACID
An essential fatty acid that occurs naturally in all kinds of oils, including sunflower oil, safflower oil, and grape seed oil. It is a type
of polyunsaturated omega 6 fatty acid  The human body cannot synthesize linoleic acid on its own, but it is an important part of our diet. Linoleic acid is important for natural skin functions and wound healing, and deficiencies in it can lead to all kinds of skin and hair issues.
As an oil component, Linoleic Acid has emollient properties, meaning that it fills in the gaps between dead skin cells on the top
levels of the skin, making the skin feel smoother, softer, and more supple. Some studies show that linoleic acid makes the skin sturdier and more resilient to damage by restoring its barrier functions. This is great for protecting and fortifying sensitive and dry skin types, and making the skin feel more moisturized. Linoleic Acid is thought to have some anti-inflammatory properties, which might be why it helps to reduce acne which is an inflammatory condition. This means that it can also help with a reduction in redness and irritation from other reasons like rosacea or general sensitivity.
Linoleic Acid has shown promise in studies as it helps to contribute to brighter skin, by helping to reduce hyperpigmentation.

HORSE CHESTNUT
In addition to the well-reported beneficial effects of horse chestnut (Aesculus hippocastanum) extracts on varicose veins and
circulation conditions, this plant extract also has many potential
positive pharmacological effects on the skin. Extracts from the
seed of the horse chestnut, contain saponins, known collectively
as ‘Aescin’, which have a gentle soapy feel and are potent anti-inflammatory compounds. Consequently, these ingredients are also known as
Escin, also reduce capillary fragility and therefore help to prevent leakage of fluids into surrounding tissues, which can cause swelling.
An extract of horse chestnut has recently been shown to have one of the highest ‘active oxygen scavenging abilities of 65 different plant extracts tested.  Such extracts are very powerful antioxidants even more than vitamin E working on its own and exhibit potent cell-protective
effects. The extract is also rich in several flavonoids, such as the derivatives of quercetin and kaempferol. Flavonoids also have
protective effects on blood vessels and are well-known, powerful antioxidants.